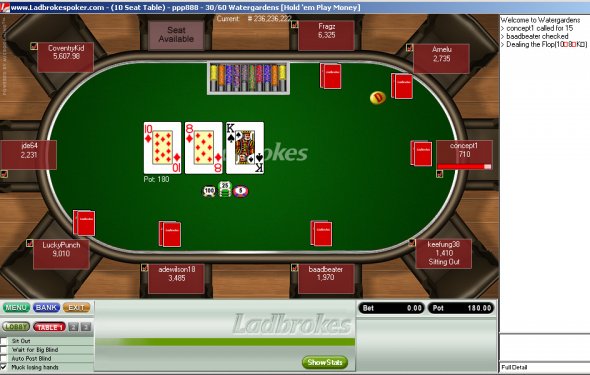 Who doesn't wish they had X-ray glasses, not just to allow them to spy on nearby colleagues, but also to see the cards at the poker table? Science isn't expected to provide any help in the next few years, but we can, in fact, get an indication from players as to what they might have. We call these "indications tells".

A tell is a conscious or unconscious signal, for instance, a gesture or the way someone looks, that reveals some information about the opponent's hand. A traitorous twitch of the eyebrow might reveal a bluff.

A poker table is teeming with tells. All you need to do is to look closely to see them. This article will help you out by detailing some common tells that players have.

There are two types of tells: an unconscious tell and a deliberate tell. An unconscious tell is one that somebody makes when he feels unobserved, or does not know he is doing it. An example is covering the mouth with his hand, particularly if done frequently.

This can be an indication that he does not have a strong hand.

A deliberate tell, on the other hand, is where he intentionally tries to convey something. He may tell you a story, so to speak, and you must figure out whether what he is saying is true or not. We'll cover deliberate tells in the next chapter.

We'll be covering the unconscious tells first. We all have our little giveaways: if we're nervous, we run our hand through our hair; some of us wiggle our feet or press our limbs together.

An unconscious tell may be something else, such as the nature of your clothing.

What a person wears also reveals much about him. Is your opponent a wild daredevil or a silent wall flower? This can give you an indication of his playing style.

The way he stacks his chips may also be of note. If carefully sort them, you are usually facing a conservative player who doesn't make crazy plays. If the chips are unorganized, he more likely varies his play and is not afraid to take risks.

Quite a few players' posture betrays the nature of their cards. An unconscious change in their sitting position, such as leaning forward, likely indicates a strong hand. With a weak hand they often show less body tension, for example, having hanging shoulders.

Imitations of real nervousness are done badly. It is usually greatly exaggerated and you can easily detect when someone is really nervous.

Should an opponent act nervous in a critical game situation, this is usually an indication of a strong hand.

Omgpop (formerly i'minlikewithyou or iilwy), stylized as OMGPOP, is a casual online multiplayer gaming website built entirely in Flash. Omgpop states on its homepage that it is "a place to hang out, play free online multiplayer games, and make friends."
Omgpop is based in SoHo, in New York City. The website was listed on TIME Magazine's 50 Best...

What is the Highest hand in poker?

The highest possible combination of 5 cards is the Royal Flush.
These are the 5 highest connecting cards of the same suit.
For instance the Ten, Jack, Queen, King and Ace of diamonds.