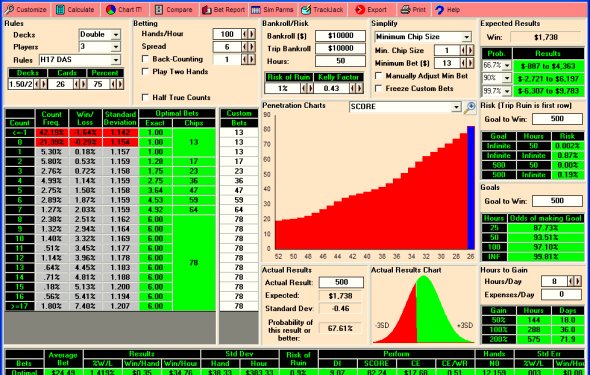 Speed Count Blackjack is a recently developed card counting system for Blackjack, that is designed to increase the player’s edge at the casino. The masterminds behind the system are Henry Tambourin and Frank Scoblete, both Blackjack professionals, who invested over two and a half years in order to establish it. Their book is called “Golden Touch Blackjack”, and can be purchased online and in regular book stores in order to find complete details for the way in which the system works.

Tambourin first hit the Blackjack scene during the summer of 1968 as a chemistry grad student at the University of Maryland, where a friend convinced him to make a trip to Las Vegas. It was only after he lost all his gambling funds that Tambourin decided to find a way to beat the system, and he has since dedicated his life to becoming a Blackjack expert. He has been writing and lecturing on the game ever since, and due to a strong history of mathematics, he now boasts over 700 articles, several books and even a range of TV and radio appearances. The Speed Count Blackjack system is his latest development.

(1) That there is an average of 2.7 cards to any completed Blackjack hand.
(2) The high percentage of low cards (2’s, 3’s, 4’s, 5’s and 6’s) in each game, which comprise 38% of the standard deck.
(3) Exactly one low card should appear in each completed Blackjack hand. Even though a player may receive no low cards or more than one, the amount he/she holds may still be able to help determine the low card count. And statistics have proven that the more decks used in the game, the more helpful these figures will be.

Despite being more difficult to grasp, the Speed Count system can be a lot easier to implement once learnt, since it eliminates the need to tediously add and subtract the low and high cards as they are dealt, which is common to most other card counting systems.

Speed Count is preformed by simply counting the amount of low cards that were dealt in ALL the player’s hands on the table – including the dealer’s – and then misusing the amount of hands from the number of low cards. For example, if there were four players plus one dealer at the table, then stats say that there should be an average of 5 low cards dealt. If the final figure exceeds the average, then the player has an edge, and vice versa. This is because the more low cards dealt on the table means that there will be more high cards left in the deck, and since there are significantly fewer high cards to a deck than low cards, it will be easier for the player to estimate what is left to be dealt.

Harvey Dubner is a semi-retired engineer living in New Jersey, noted for his contributions to finding large prime numbers. In 1984, he and his son Robert collaborated in developing the 'Dubner cruncher', a board which used a commercial finite impulse response filter chip to speed up dramatically the multiplication of medium-sized...

How to Speed count cards in blackjack
Related Posts
Categories
Latest Stories
Blackjack decision table The same abbreviations that were used in the tables and charts for single-deck...
Play Blackjack online free Practice Free blackjack, as the name would imply, is any game of blackjack where...
Top Blackjack Tips Even though a standard blackjack strategy can help you get ahead, there...
How to win at Blackjack every time? It can be incredibly frustrating. Everything you’ve read says that blackjack...
House Advantage in Blackjack Online blackjack is one of the most played games by players from all over...
Virtual Strip Blackjack Blackjack originated in the 1700s, making it one of the oldest and most...
Probability of winning in Blackjack Introduction Doublet Blackjack is a blackjack game created by Gamesys N.V...