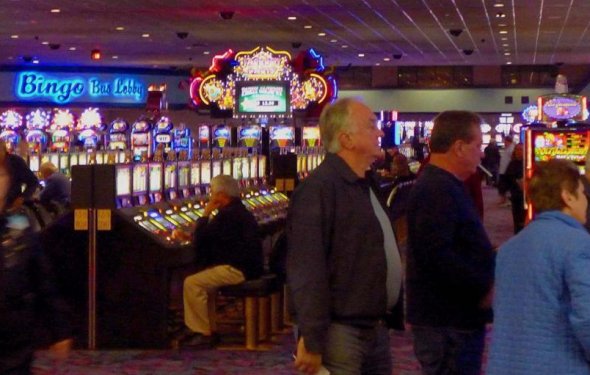 Foxwoods Resort Casino is owned and operated by the Mashantucket Pequot Tribal Nation and is located on its reservation in southeastern Connecticut. Foxwoods began in 1986 as a high stakes Bingo parlor.

The casino was opened in 1992 offering table games only. In 1993, the Pequots made a deal with the State of Connecticut that allowed them to install slot machines in return for 25% of the revenue generated from the machine’s profits.

In the following 17 years Foxwoods has grown to become the largest casino in the United States and second largest in the world behind the Venetian Casino in Macau, China.

Casino size is measured by actual gaming space and Foxwoods has 340, 000 square feet of gaming space which houses over 380 table games, 7, 400 slot machines and a 104-table poker room.

Foxwoods is a unique resort/gaming destination set in the beautiful woods of Connecticut, but still close to dozens of Connecticut’s other vacation attractions. It has something to offer everyone including: fine dining, major entertainment, golf, shopping and of course some of the best gambling in New England.

The sprawling resort has been a work in progress since its beginning and every time they expand it is like a new casino has been added. In fact, their web site proclaims that they have six casinos within the property.

Foxwoods Resort Casino and the new MGM Grand at Foxwoods

The original Rainmaker, Grand Pequot, MGM Grand at Foxwoods and the Newport casinos offer table games and slots. There are also slot-only casinos, including a non-smoking casino. All of the “casinos” are connected and you never have to wander outside. However, be prepared to walk about a mile if you want to go from one end of the property to the other.

The 12-foot-tall Rainmaker statue is illuminated and features a narrative story about the Pequot tribe's history.

The job of a Casino Host is to deliver services to players at their casino who will become loyal patrons to the establishment.
A Casino Host will usually try their best to please patrons of their casino and will do their best to fulfill any reasonable requests their clients might have. The casino host has the power to issue complimentary...

What are the rules to blackjack.

What are the rules to blackjack