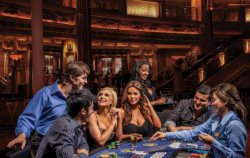 Card counting conditions are better at MGM than at most other places in Las Vegas. One great aspect of playing blackjack at MGM is that the casino is huge and is usually packed, especially on weekends. This gives surveillance and the pit crew a lot of action to watch over. There are plenty of high rollers in the S17 area, so it’s easy to blend in there. The double deck game at MGM Grand is really good for a solo card counter, but it’s watched pretty closely. Be sure to keep your sessions short and use some decent cover.

For card counting teams, you’ll find that entering mid-shoe on the 6 deck tables is pretty easy and gets very little hassle. Some casinos don’t allow mid-shoe entry while others impose a mid-shoe entry max bet of $200 or so (New York, New York and Planet Hollywood come to mind). This isn’t the case at MGM, so go ahead and throw those yellow chips out there!

Jack Murphy - Obey The Rules [OFFICIAL VIDEO]
Related Posts
Categories
Latest Stories
Blackjack decision table The same abbreviations that were used in the tables and charts for single-deck...
Play Blackjack online free Practice Free blackjack, as the name would imply, is any game of blackjack where...
Top Blackjack Tips Even though a standard blackjack strategy can help you get ahead, there...
How to win at Blackjack every time? It can be incredibly frustrating. Everything you’ve read says that blackjack...
House Advantage in Blackjack Online blackjack is one of the most played games by players from all over...
Virtual Strip Blackjack Blackjack originated in the 1700s, making it one of the oldest and most...
Probability of winning in Blackjack Introduction Doublet Blackjack is a blackjack game created by Gamesys N.V...