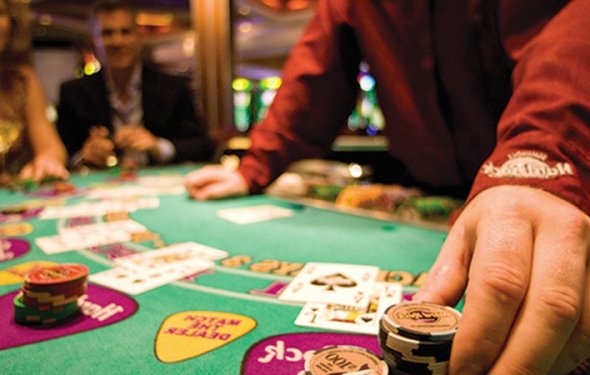 Joshua Gunter, The Plain DealerServer Catrina Robinson carries a tip jar on her tray at the Horseshoe Casino Cleveland.

CLEVELAND, Ohio - Northeast Ohioans have been traveling out of state to gamble for years, but casinos are new in Ohio and those who never made the road trip may have a question or two about the etiquette for tipping.

Customers have no obligation to tip when visiting the Horseshoe Casino Cleveland, which a spokeswoman says has been drawing 10, 000 to 25, 000 people a day. But they should keep in mind that many of the employees make less than the minimum wage, which is allowed under federal law because tips are factored into their compensation.

Dealers, who comprise the largest bloc of the Horseshoe's workers, are paid a base of $4.25 an hour, with the casino estimating that tips, on average, will increase the rate to more than $17. Slots attendants, beverage servers and cocktail waitresses get $6.

If you decide to tip, questions mount. Whom? When? How much?

There are no hard and fast rules, but the consensus on gaming and travel websites favors tipping $1 or $2 per round or drink to a casino's bartenders, beverage servers and cocktail waitresses and 10 percent at the buffet.

Sources differ on how much to tip parking valets - some say a buck or two is appropriate both when dropping off and again when picking up; others suggest giving up to $5 when the car is returned.

Winners tip the dealers in the poker room. A dollar is common, but players may kick in more when the pots are large.

Slot attendants are easy to overlook unless you win a hand-delivered payoff, triggered when the jackpot hits the $1, 200 threshold for notifying the Internal Revenue Service. Gaming consultant Michael Shackelford, known for his website, "The Wizard of Odds, " conferred with experts and wrote last year that the tip should equal 0.5 percent to 1 percent of the slots payoff.

The Horseshoe's dealers take their tips, also known as tokes, exclusively in chips that can be converted to cash.

Throwing a chip to the dealer between games avoids mistaking a tip for a bet. If confusion arises, a dealer will confirm the player's intent to tip, then tap the chip or chips twice on the table as an all-clear signal to the surveillance cameras and deposit the gift in a clear box emptied once a day.

Placing a bet for the dealer is a popular gesture. In blackjack, the most common table game, players put the extra chips outside their betting circles; craps players shift, or "heel, " the chip slightly off center atop their stack to keep it out of the path of rolling dice.

A dollar or two bet for the dealer is sufficient, even if the game's minimum is higher. But Tosha Tousant, director of table games at the Horseshoe, said she knows of instances in which players have bet $500 on the dealer's behalf.

And don't worry about the dealer bet not counting toward your customer comps. The pit bosses don't tally every chip; instead, they keep general track of how long players stay and how much is wagered.

John Grochowski, a freelance casino columnist and author based in Chicago, recommends tipping blackjack dealers every 15 minutes, in an amount equal to 10 percent to 20 percent of the bet you make at the time.

How to Play Basic Blackjack : Dealers & Tables to Avoid in ...

How to Be a Great Blackjack Dealer.

Want to increase your earning potential and likability as a blackjack dealer? You can learn how to be a great blackjack dealer even before getting hired or trained. The casino or dealing school you attend will teach you the actual mechanics of how to shuffle cards and handle chips, and they'll give you manuals about game protection and efficiency, but they won't teach you about making good decision, working with the pit bosses, and handling your players.