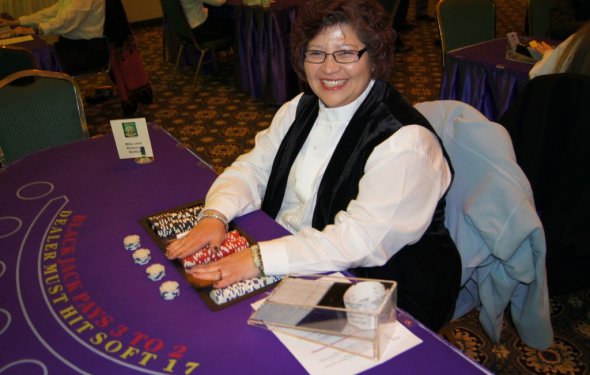 A blackjack dealer at Connecticut’s has pled not guilty to cheating the casino out of over $78k.

Roy Mariano appeared in New London Superior Court on Monday to face charges of first-degree larceny after an investigation produced evidence that the 52-year-old dealer had overpaid a particular blackjack player a total of $78, 390. The player, Marlene Rivera, is facing similar charges but has yet to enter a plea.

As reported by The Day, Tribal Gaming Commissioner Robert Bjork asked the Mohegan Tribal Police to open an investigation into Mariano in September. Officer Thomas Nickerson reviewed the casino’s surveillance recordings, which revealed that Mariano had been sneaking a single $100 chip into stacks of $5 chips every time he paid Rivera for a winning hand.

Questioned by Bjork, Mariano said he’d been short of money ever since the casino shifted him from full-time to part-time employment in March. Mariano claimed Rivera approached him a few months later about participating in the scam. Mariano said he couldn’t remember exactly how big a cut of the ill-gotten gains Rivera had shared with him.

However, Rivera claimed it was Mariano who originally suggested the plan to her boyfriend, whom she claimed shared half of the take with Mariano. Eventually, Rivera took her boyfriend’s place at the table and continued to share the take 50/50. Surveillance footage reportedly shows Mariano and Rivera engaging in the scam on 16 different occasions during the month of August.

Rivera claimed she would settle up with Mariano after his shift was over and he was making his way to the break room. However, surveillance footage apparently failed to pick up any of these exchanges, and none of the casino floor supervisors reported being aware of anything untoward going on.

With all that tempting money exchanging hands, casinos are hyper-vigilant when it comes to monitoring their employees for suspicious activity but occasionally the crooks elude detection … for a while, at least. In October, a conniving foursome of dealers and bettors were charged with cheating and theft for a long-running scam at craps tables that cost the Bellagio casino in Las Vegas around $1.5m.

How to Be a Blackjack Dealer : What is a Split in Blackjack?
Related Posts
Categories
Latest Stories
Blackjack decision table The same abbreviations that were used in the tables and charts for single-deck...
Online Blackjack Sites Online casinos have become extremely popular over the last few years. While...
Top Blackjack Tips Even though a standard blackjack strategy can help you get ahead, there...
Blackjack insurance rules One of the original blackjack side bets is the Insurance wager. This side...
House Advantage in Blackjack Online blackjack is one of the most played games by players from all over...
Card games for two easy Don t forget that card games are also great for holidays - both for travelling...
Probability of winning in Blackjack Introduction Doublet Blackjack is a blackjack game created by Gamesys N.V...