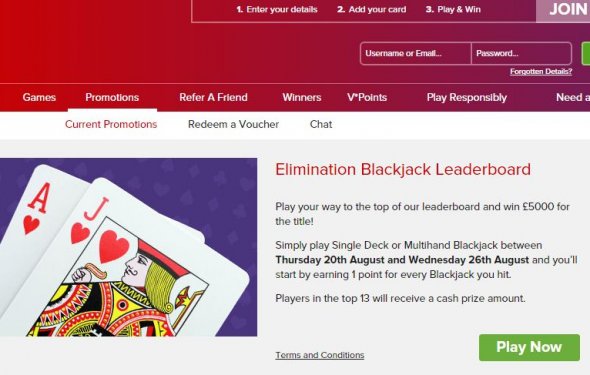 Elimination Blackjack is played at a quick pace - each player has 25 seconds to make a decision. On Elimination hands, players have only 10 seconds to make a decision. If a player does not bet within the allotted time, the amount of the bet will automatically be the minimum. If the player does not decide whether to hit or stand within the allotted time, the hand will automatically stand.

Many standard blackjack rules apply in Elimination Blackjack. Six standard decks are used. The dealer must hit on a soft 17 and anything below, and must stand on hard 17 and anything above. A player may split up to three times (except when splitting aces). Players may double down on any first two cards including after a split. Surrendering is allowed after the first 2 cards have been dealt. A player may buy insurance if the up card for the house is an ace. Doubling down after splitting is allowed, except when splitting aces. A player will be paid 3:2 on blackjack unless the dealer has blackjack also, which will be considered a push (a tie). If the player splits a pair of aces and then has a two-card 21, it does not count as a blackjack.

Elimination Blackjack is a tournament format of blackjack invented by Russ Hamilton, and is played on the Ultimate Blackjack Tour and in various casinos. It combines the game of blackjack with elements of No Limit Texas Hold'Em. Unlike Texas Hold'Em tournaments, players are still competing against the same dealer that is why the results of most...

Why don't casinos use a fresh deck of cards for each hand of blackjack to eliminate card counting?

Even though not shuffling after every hand allows card counting to be possible, most casinos play with multiple decks combined at Blackjack tables. Furthermore, even with card counters, a casino will still make a profit. !