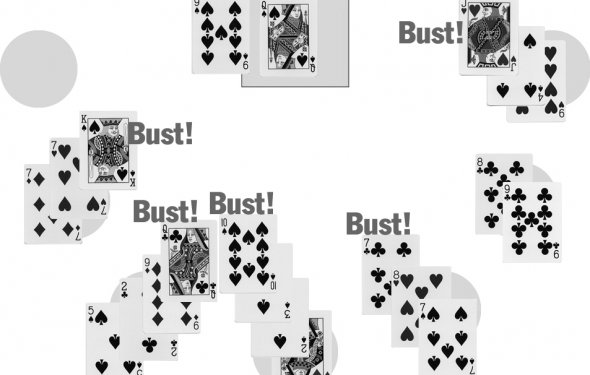 One solution to this is a different system known as the KO Count (which, appropriately, stands for “Knockout Count”). The theory behind the system is very simple, especially to players familiar with the Hi-Lo method. When this method was first developed in the 1990s, card counting veterans were stunned that such a simple system compared so favorably with more complicated methods.

The KO method features one major change from the Hi-Lo method: seven is now a low card instead of a neutral card. That means, when you see a 7, add one to the running count. That’s it; all other cards retain their low, high, or neutral status. This means that if you count a full deck, you will end up with +4 instead of zero, making the KO method an “unbalanced system.”

There is no need to compute a true count with the KO system. Since it is an unbalanced method, the count will be above zero most of the time, so a positive number is no longer indicative of favorable conditions for the player. Instead, a certain value is chosen, above which the player begins to increase their bets. Normally this value is +2 times the number of decks in play; so for a six-deck game, the player would increase their bets once the count rises above +12 (+2 count times 6 decks).

One final note on the KO system: when the dealer’s upcard is an ace, the player is offered a side bet known as “insurance” that pays out if the dealer has blackjack. Basic blackjack strategy dictates that the player never take this bet. However, KO strategy suggests the player always take insurance if the count is over +3 times the number of decks in play (so over +18 in a 6 deck game).