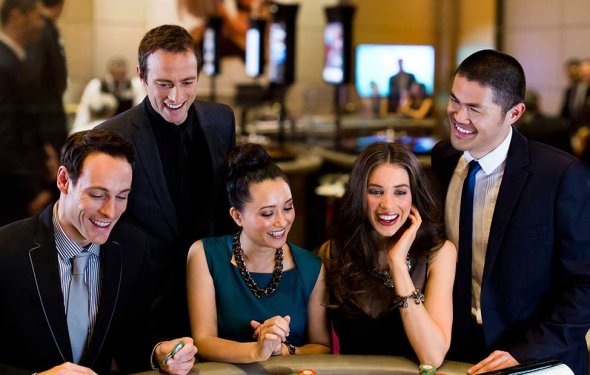 When Circus Circus first opened on the Las Vegas Strip in 1968, it had only a showroom, some restaurants and a casino—no hotel. Today it is full-fledged resort with 3, 770 guest rooms, an RV park, three swimming pools, an indoor amusement park, and full-service meeting and convention facilities. What has endured half a century of change, however, is its steadfast emphasis on “playful entertainment, ” amply evident in the high-wire and trapeze acts performed directly above the 101, 286-square-foot gaming floor and reflected in its catchphrase, “Act your age somewhere else” . For blackjack players, it’s all about low stakes action and having fun.

Blackjack takes center stage in the main pit of Circus Circus. The vast majority of its 49 gaming tables are dedicated to versions of 21, and there are three basic games offered: single deck, double deck and a six deck shoe . All games have the dealer hit on soft 17 and allow doubling down after splitting (DAS), but they do not offer surrender or re-splitting of Aces (RAS). The best value here is the $25 double-deck table with a House edge of 0.45%, but the most popular table is the six-deck one with a $3 minimum and a House advantage of 0.64% . Tables betting limits go as high as $3, 000.

According to one study, the overall House edge at the Circus Circus blackjack tables is 0.68%, which places it right in the middle of all Strip casinos . Like so many other Las Vegas gaming venues, Circus Circus has introduced $5 and $10 single-deck games that pay only 6:5 for a natural blackjack instead of the standard 3:2. However, at “select times daily, ” blackjack in the “Rockin’ Party Pit” pays 2:1, which gives the player a significant boost in odds. Look for flashing red lights to signal the periods when this special rule is in effect throughout the day, every day.

There also used to be live blackjack tables at the Circus Circus’s neighboring affiliate called “Slots A Fun”, but that property has replaced all of its table games with machine versions. For blackjack players, there are three five-seat machines: two “Royal Match 21” units and one “Bet Set 21” unit. The minimum wager is $1.

According to Frommer’s travel advisory, Circus Circus is “the last bastion of family-friendly Las Vegas.” The existence of clown acts, juggling, acrobatic performances and a noisy carnival midway may put off more serious blackjack players, but it is perfect for parents seeking a place for their kids to hang out while the adults play. Children are not allowed on the casino floor, of course, but the mezzanine level is almost always packed with teens playing arcade games, while a steady stream of pre-adults can be seen strolling the carpeted walkways between the gaming areas en route to Adventuredome in the rear. For those new to blackjack, free lessons are offered at 10:30am daily .

dabong! is a card game played with a specially printed deck. The game was originally invented in 2003 by Bill Eberle, Jim Langeland and Blaine Moore in Kalamazoo, Michigan. In 2011, dabong! was published by Astute Games, founded by John Cooper and Kilton Hopkins, out of Chicago, Illinois. dabong! combines aspects of Crazy Eights, Poker...