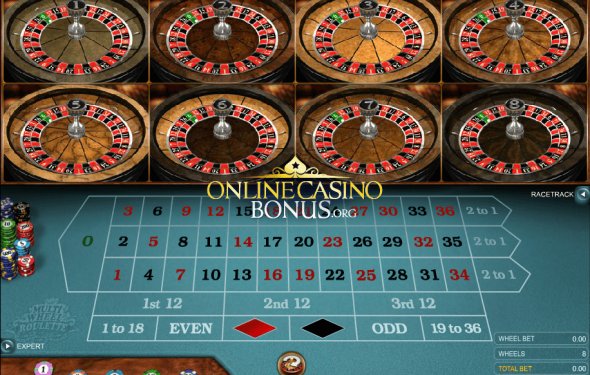 When discussing the most popular blackjack variations, it is a must to mention Multi Hand Blackjack. As the name suggest, this game allows the players to play more than one hand per a game. Generally, it is played with five, six or eight decks of cards and the rules are almost the same with the other blackjack games. Nevertheless, players all over the world recognise it as one of the most attractive and exciting blackjack variations. For further information about the game rules, house edge and optimal playing strategy keep reading this text.

This is a game played with five, six or eight decks of 52 cards. The player in this game can play more than one hand in a single game session. This rule makes blackjack variation unique and exciting to those who want a fast paced game-play. Every hand is played separately and the main objective is to score a blackjack and beat the dealer’s hand. Certain casinos allow the dealer to peek for a blackjack, while others do not allow this. The same can be said for standing or hitting on soft 17. In any case, a card score higher than 21 is considered a bust and whoever has it (player or dealer) loses the game session.

No matter the Multi Hand Blackjack variation, the player is not allowed to surrender. However, some rule modifications allow the player to double on any hand, while others allow doubling on 9-11 only. Similarly, in some casinos the player can double after splitting and in some he cannot. This is why knowing the exact game rules is crucial for a good game strategy. However, the player can play simultaneously more than one hand in a single game and use different strategies for any of the hands. Placing insurance bets with a payout 2:1 is possible right after the player and the dealer receive the first two cards. The game continues until the player and the dealer finish their hands and the winner is known. If the player wins, he gets a payout 3:2, while if the dealer wins the player loses his bet amount.

In that variation of the game played according to the rules explained above the house edge is 0.58%. However, if the game variation allows the player to double after splitting, the house edge instantly is lowered to 0.46%. Also important is the number of decks used in the game. For example, playing with eight decks of cards without changing any of the rules will increase the house edge for 0.02% and result in a house edge of 0.60%. Other rules that affect the house edge are peek or no peek, double on any or double on 9-11 only and etc.

Insurance as a way out

The Scania OmniCity is an integrally-constructed transverse-engined low floor citybus available on the European market. The OmniCity is a complete product built in Poland by Scania AB, a company based in Sweden.
In 2006 the Scania OmniCity design was updated (for the Euro IV version), with the large front headlamps being replaced by smaller...

Common Hand BlackJack® Single Hand (Common Hand Game)
Related Posts
Categories
Latest Stories
Blackjack decision table The same abbreviations that were used in the tables and charts for single-deck...
Play Blackjack online free Practice Free blackjack, as the name would imply, is any game of blackjack where...
Top Blackjack Tips Even though a standard blackjack strategy can help you get ahead, there...
How to win at Blackjack every time? It can be incredibly frustrating. Everything you’ve read says that blackjack...
House Advantage in Blackjack Online blackjack is one of the most played games by players from all over...
Virtual Strip Blackjack Blackjack originated in the 1700s, making it one of the oldest and most...
Probability of winning in Blackjack Introduction Doublet Blackjack is a blackjack game created by Gamesys N.V...