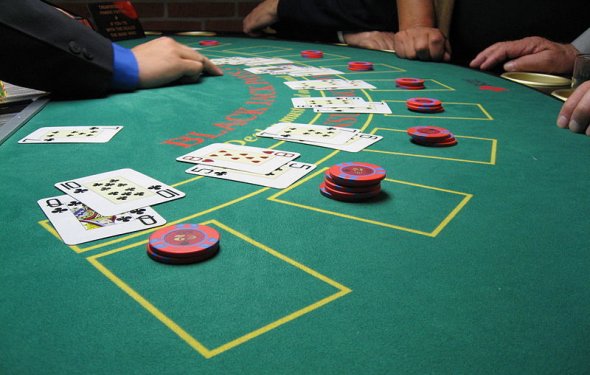 Rather than spend hours creating a long list of all the flaws in the "21" movie, it would be easier to list what has some basis in truth.

There was indeed an MIT blackjack team. In 1994, when the events loosely depicted in the movie took place, there was just one team. A second competing team came along later. In addition, many other colleges had teams as well, including my own UCSB. The book Bringing Down the House, by Ben Mezrich, is about an MIT team, and takes a lot of poetic license with the truth. The movie, in turn, takes a lot of poetic license from the book.

The spotter and big player strategy is a very well-known and successful card-counting tactic. It is covered well in Ken Uston’s blackjack books. As shown in the movie, a spotter will count the cards, and signal the big player to jump in when the count is good. Briefly, a good count means the remaining cards are rich in tens and aces, which favor the player. The spotter will keep a low profile, betting small, playing basic strategy. When the big player comes in, he will appear to be the average table jumper, playing for a few minutes, and leaving when he has a bad run of cards or the dealer shuffles. It is accurate that the spotter will convey the running count to the big player with a code word. Unlike the movie, it would be advisable for the spotter to leave, after the big player arrives. Pretending to get a cell phone call would be a good excuse. Otherwise, the spotter would consume valuable good cards, leaving less for the big player. It is also ill-advised to make it easy for the casino to make the connection between spotter and counter, by the two often playing at the same time and table. Once the big player arrives, and knows the count, he can take it from there, and leave when the count gets bad. Sometimes the big player will not know how to count, in which case the spotter will have to signal what to do, but such was not the case in the movie. Unlike the movie, a good team would change its signals and code words, from time to time. I don’t think I can fault the movie for this, because I read that most Strip casinos didn’t want to be involved, but all the playing seemed to be done at just four casinos: the Red Rock, Hard Rock, Planet Hollywood, and Riviera. Good teams and individual players spread their action over many more properties than that, to avoid detection.