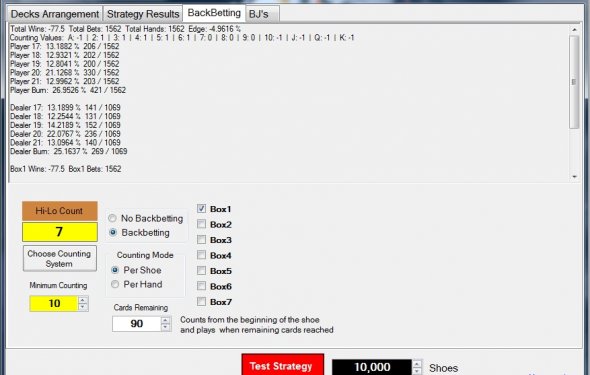 The “Lucky Lucky” (LL) blackjack side bet has payouts based on the player’s two cards and the dealer’s up-card. After the player makes the LL bet, the values of the player’s two cards and dealer’s up card are summed. Hands that total 19, 20 or 21 are winners, with bonuses for suited hands and for the hands 6-7-8 and 7-7-7. All other hands lose. As usual for blackjack, an Ace counts as 1 or 11. From 2009 through early 2012, this wager was licensed through Gaming Network, Inc. Unfortunately, Gaming Network dissolved in April of 2012. This wager is now licensed through DEQ who announced acquisition of Lucky Lucky in this press release.

There are versions of the bet for both a double-deck game and a six-deck shoe. Here are the most common pay tables and the house edge for each:

The following table gives the effect of removal (EOR) for each card for the double-deck version of LL. This table shows the importance of the 6’s, 7’s and 8’s to player side. The Aces are also good for the player, mainly because of their dual role as a value of 1 or 11. This table also shows that the cards 2, 3 and T benefit the house so that the edge moves towards the player as they are played from the deck. The reason for this is intuitive. First, the 2’s and 3’s are too small; it is hard to get a total up to 19 after being dealt these cards. Next, if the player is dealt a Ten-valued card, then most likely his three-card total will exceed 21. The card counter likes it when there are a lot of A’s, 6’s, 7’s and 8’s in the deck. He doesn’t like it when there are a lot of 2’s, 3’s and T’s in the deck.

System 1 in not meant as a practical system. However, as a baseline counting system, it is worthwhile to see how it performs. In an effort to simplify this system, I also considered the balanced card counting system with tags (-1, 1, 1, 0, 0, -1, -2, -2, 0, 1). I’ll refer to this system as “System 2.” This system is easily used by a card counter of average skill level.

I wrote a computer program to simulate using these two systems in live play. My baseline simulation assumed a double-deck version of blackjack. For convenience, I’ll refer to the double-deck game as a “shoe.” After the cards in the shoe were shuffled, I assumed that the cut-card was placed after the 75-th card in the shoe. A burn card was dealt and the shoe was played out until the cut card came out. The shoe was then shuffled and the next shoe was simulated.

Cheating in poker is any behavior outside the rules that is intended to give an unfair advantage to one or more players.
Cheating can be done many ways, including collusion, sleight-of-hand (such as bottom dealing or stacking the deck), or the use of physical objects such as marked cards or holdout devices.
Cheating occurs in both friendly...

How to Speed Count Playing Cards.

This is a really cool card trick that will leave you audience dumbfounded. It is very impressive and doesn't require much practice.