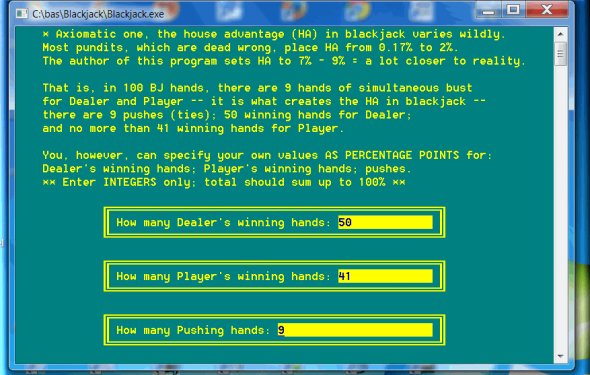 In this new series on the Myths of Blackjack, I’m starting with the most common myth surrounding the game.

Ken: Yeah, I’ve played a lot of blackjack over the years.

Interested Player: You know what really drives me crazy about blackjack? …

Interested Player: You sit down and get a good game going, and then some idiot sits down at third base and starts messing up the cards. What do you do about that?

OK, I’ll start with a fact…

Other players have no appreciable affect on your results.

That’s right… Johnny Clueless from Buffalo who sat down at your table had nothing to do with your losing streak.

Now, if you already knew this to be true, you probably know what happens next in the conversation. Trying to explain that other players can’t screw up your results invariably leads to that blank stare. You know the one. It’s where you can almost see them thinking: “This Kenny guy doesn’t know squat about blackjack! How did he ever make any money?!”.

Generally, I don’t even bother trying to dispute their notion. Instead I’ll just nod my head as if these kinds of players bother me too, and change the subject as soon as I can.

As penance for all those times, let me make a concerted effort to explain why this is a myth. Even those of you who don’t need enlightening might find some ammo for your own rebuttals here too.

There are actually a whole group of possible complaints about Johnny Clueless. We’ll address them one by one.

People jumping in and out of the game can’t “mess up the cards.”

So you’ve been winning a few hands, and when Johnny Clueless jumps in mid-shoe and adds an extra hand to the deal, the dealer starts killing everyone. It must be his fault, right? Well, no. Cause and effect is a tricky thing, especially in games where randomness is a factor. Our brains are evolved to look for patterns in causality, and that makes us see patterns and causes everywhere, even when they don’t really exist. There wasn’t anything magic about the number of spots that was already in play before he added a hand. There was certainly no guarantee that you would continue to win if he didn’t enter the game. He’s just a convenient scapegoat for our brains to blame as a cause.

The problem here really stems from the related myth that there are “hot tables” and “cold tables” in the casino. If you have won the last ten hands in a row, you would be accurate in saying that the table has been hot, but that tells you absolutely nothing about the next ten hands to come. But of course, if Johnny sits down and you start losing, you know who will get the blame. There’s no such thing as a hot table, only a table that has been hot.

In poker, players may often use slang terms for particular types of hands. Though most are recent neologism, others date to poker's antiquity. All such slang terms typically connect a common concept (from life experience or storytelling) to the hand, in order to more easily characterize its general status relative to other hands. The terms...

Fireworks Vancouver Washington - CALL 360-409-3952 - Mean ...
Related Posts
Categories
Latest Stories
Blackjack decision table The same abbreviations that were used in the tables and charts for single-deck...
Online Blackjack Bonuses One driving force behind the popularity of online blackjack is that many...
Top Blackjack Tips Even though a standard blackjack strategy can help you get ahead, there...
Values of cards Once you’ve familiarized yourself with some of the key cards to look for...
House Advantage in Blackjack Online blackjack is one of the most played games by players from all over...
Male Strip Blackjack Riande Continental I have been writing about casinos for 14 years. In those...
Probability of winning in Blackjack Introduction Doublet Blackjack is a blackjack game created by Gamesys N.V...