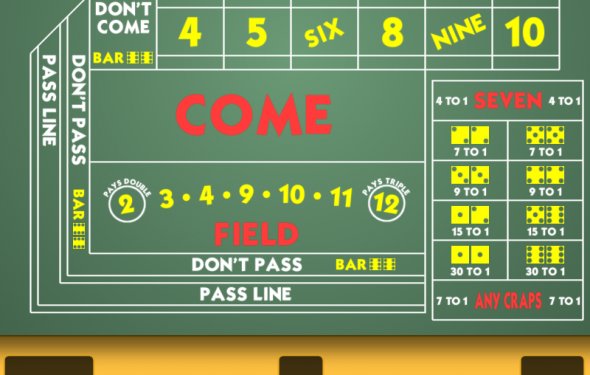 In California the dice alone may not determine the outcome in craps. So a combination of dice and playing cards, or cards alone, are used. There are numerous ways this is done. Here are some methods I am aware of.

Twelve cards are used, an ace through six from two separate decks, with different color back sides. The cards will be shuffled and spread across the table face down. The first card of each color from one end shall be used to represent the roll. The odds are the same as with dice.

Six cards are used, numbered one to six. They are randomly placed in six positions on the table. The roll of two dice will determine which card(s) are turned over, that shall deterine the outcome for betting purposes. With each new shooter, the cards are re-arranged. The odds are the same as conventional craps.

Same method as the Agua Caliente.

Two separate six-card decks, one red and one green, are used. Each shoe consists one each of ranks A, 2, 3, 4, 5, and 6. Aces count as one, all other ranks count according to its pip value. Six cards are dealt from each shoe. Two ordinary dice are thrown, one red and one green. The outcome of the dice determine which cards are turned over, which represent the roll. The odds are the same as conventional craps.

Two partial decks are mixed together, each consisting of all four suits ranked ace to six. So, there are 48 cards total. Two cards are drawn without replacement. If they are the same suit, then there is no action. Otherwise, the two cards represent the roll. This is mathematically equivalent to using dice. There is also a "No Call" bet, which pays 3 to 1 on two cards of the same suit. The house edge on that bet is 6.38%. As usual with the Los Angeles county casinos, the player must also pay about a 1% fee on all bets.

The following equipment is used: (A) A red die numbered with three 1's, and three 4's, (B) a blue die numbered with three 2's, and three 3's, and (C) A 36-card deck featuring all possible permutations of two dice. Two cards are drawn at random and placed face down over red and blue regions of the table. The dice are thrown. If the red die is higher then the red card is turned over and used as the roll, if the blue die is higher then the blue card is used. Note that there can be no ties. Also the blue die is irrelevant. A 1 on the red die will always lose to the blue die, and a 4 will always win. The odds are the same as conventional craps.

Treasure Valley is a Native American casino located in the Arbuckle Mountains of Davis, Oklahoma in the south-central part of the state. Owned and operated by the Chickasaw Nation, the gaming center was opened in July 2003. The Inn at Treasure Valley is a 59-room hotel has an indoor swimming pool and jacuzzi, continental breakfast, exercise...

Wizards of Odds - Is Free Will an Illusion?

Is there an easy way to remember Craps Free Odds payments? | Yahoo Answers