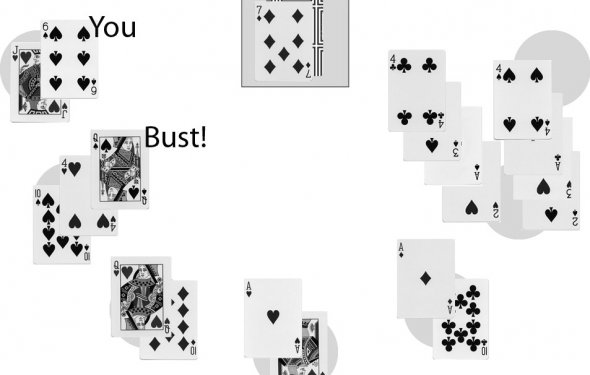 I always thought that Blackjack, or 21, was a simple game that I was unlucky at. The rules seemed easy enough: the combined sum of my playing cards had to be greater than the dealer’s cards without “busting” (or exceeding a score of 21). My basic strategy was to hit, or ask for additional cards, whenever my sum was 16 or less, and to stand on a 17 or above. I never realized that there was so much more to the game or that by memorizing a few simple rules I could increase my odds of winning dramatically.

In preparation for a recent vacation to Las Vegas, I read a book called “The Winner’s Guide to Casino Gambling” by Edwin Silberstang.

It outlined a few simple rules that when followed, can greatly increase your chances of winning any given Blackjack hand. In fact, when the rules are followed the House advantage narrows significantly (to less than 1%). During my Vegas vacation I was able to make my money last for hours, and even doubled my money on many occasions.

The first thing you need to do is add up the sum of your own cards. Each card from 2 to 9 takes the point value of its number (for example a 2 of clubs would be worth 2 points), while 10s, Jacks, Queens, and Kings are called face cards and are worth 10 points each. Aces can count for either 1 or 11 points.

If neither of your two cards is an Ace you have what is called a “Hard” total, and if one of your cards is an Ace you have a “Soft” total; this is because your Soft pair’s total may vary depending on whether your Ace counts as a 1 or an 11. An Ace combined with a face card will total 21 – also known as a Blackjack. If the dealer is showing an Ace they will offer insurance to the players; this means that you can bet half your initial wager that the dealer has a Blackjack. Even if the Dealer tells you it’s a good deal you should never buy insurance (unless you are counting cards and know that the cards are in your favour).

Now look at the table; An “H” on the table means hit, “D” means double down, “S” means stand, and P means split. “R” means surrender, but this option is not available on most Vegas tables. Those casinos that allow you to surrender will give you half your initial wager back.

Cyndy Violette (born August 19, 1959 in Queens, NY) is an American professional poker player who won a World Series of Poker bracelet in 2004.
Violette often played poker with family members as a child. Her family relocated to Las Vegas when she was 12 years old; Violette took to playing casino poker once she reached the legal age. She spent a...

Play Casino Games Such as Roulette, Blackjack How to Win ...

How to Play Blackjack and Win Today!
Related Posts
Categories
Latest Stories
Blackjack decision table The same abbreviations that were used in the tables and charts for single-deck...
Play Blackjack online free Practice Free blackjack, as the name would imply, is any game of blackjack where...
Top Blackjack Tips Even though a standard blackjack strategy can help you get ahead, there...
How to win at Blackjack every time? It can be incredibly frustrating. Everything you’ve read says that blackjack...
House Advantage in Blackjack Online blackjack is one of the most played games by players from all over...
Virtual Strip Blackjack Blackjack originated in the 1700s, making it one of the oldest and most...
Probability of winning in Blackjack Introduction Doublet Blackjack is a blackjack game created by Gamesys N.V...